Social media, when used correctly, is perhaps the most efficient way to talk to your audience, whether they be a small, localized group of fans who frequent your restaurant, or a million-strong community across the world; the content you upload to your social platforms has a very real impact on them. That’s why uploading the wrong content can similarly have very real consequences.

“If you don’t have something nice to say, don’t say anything at all.” You’ve probably heard this from your mom or a similar sentiment from any episode of The Andy Griffith Show. Unfortunately, the Internet has made it extremely easy to say very rude things to complete strangers, anonymously, and without repercussions. So, it’s inevitable that you’re going to see some negative comments lobbed at your brand. But before you retort with a clapback so huge it’ll register on seismic activity sensors, take a step back and consider the fallout.

We all enjoy responding to positive reviews with positive messages, and as hard as it can be, negative comments or reviews should be treated the same. In polite language, inform the complainer that they can reach out offline to have their voice heard in a more official capacity. This will likely prevent them from causing a scene in a public forum as well as make them feel listened to. Remember, when they go low, we grit our teeth and politely offer to help make things right in a more direct, offline channel.

With that said, if someone is purposefully posting hateful or inflammatory messaging without cause, feel free to hide, delete, or block their comments completely. Handle trolls like the government handles terrorists: Don’t negotiate with them.

Social media (particularly Instagram) is a very visual medium. It’s likely that your content is going to consist of a ton of photos and videos. It only makes sense to showcase your content in the best light possible! Make sure your photos are well-lit, bright enough, and in a large enough resolution to not be blurry or pixelated. If you’re curious about best practices for content sizing, look no further than our handy dandy Social Media Cheat Sheet!

“Too much of a good thing” is, unfortunately, a very real problem. Just like I can’t constantly eat Trolli Sour Gummy Worms, so should you avoid submerging your audience in a flood of your content. Work on finding the cadence that works best for your business. Are you a brand that is known for producing lots of content for your readers or viewers? You might be more able to get away with posts every hour than, say, a local dentistry bombarding their audience’s feeds with hourly posts about routine cleanings and floss. If you’re completely unsure of where to start, it’s always better to start small and work up, paying close attention to analytics as you begin to scale. In the end, it’s always better to produce a few quality posts than a mountain of trash.

People don’t like when they feel they’re being sold to. It’s why I will choose to order food online rather than having a real human try to upsell me on guac for $2.29 extra. Folks especially don’t like being repeatedly sold to in their social media feeds. If you’re running a happy hour special, it’s best not to hammer “$3 OFF SPECIALTY COCKTAILS FROM 4-6 PM” until your audience’s eyes begin to bleed and their heads start to rattle. In between the occasional bit of overt messaging, try and be a little more covert. Feature tasty images of happy hour menu items, some UGC (user-generated content) of people at happy hour, maybe relatable messaging about the workweek dragging on forever.

Just remember to be subliminal instead of… super liminal? In other words, get your message across in ways that won’t annoy your audience. One way to capture their attention is by employing the use of vertical content into your strategy. Lucky for you, I wrote a guide to vertical content that should help you out. Also, I just subliminally promoted a piece of my content without you realizing it. *dusts hands* That’s how it’s done.

5. Links that you haven’t personally checked

If you’re posting native links to your own website, you may be curating other link content for some much-appreciated thought leadership appearances, be sure to check to make sure the links you’re sending your communities to actually work. Not only that, but they’re smooth UX experiences, are coherent, and are pieces of content that you’d truly want to be associated with your brand. It’s a simple check that’ll garner you lots of goodwill down the road.

6. Content that doesn’t match your brand’s voice or intentions

I’m going to make a confession here, folks. I’m a bit of a sucker when it comes to brands publicly putting their feet in their mouths on social media. 99.999% percent of the time, it comes down to them trying to insert themselves into a conversation they have no business being in. Before you hit “post,” ask yourself if you really belong in the discussion or not. If not, you could end up like Spaghetti-O’s strange homage to Pearl Harbor that many found distasteful and downright bizarre. Again, just because the #PearlHarbor tag is trending doesn’t mean you have to use it! Hashtags are easy ways for people to lend their voice or opinion on topics that resonate with them, and if your brand participates, it should be for the same reasons.

But don’t be too gun-shy! When it makes sense, leveraging a trending topic or event that makes sense to your brand’s voice is one of the most effective ways to potentially bring in new fans and further establish yourself in an extremely crowded space. 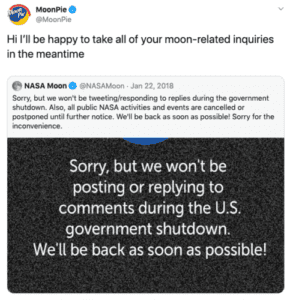 When the government shutdown happened in early 2018, NASA’s official channels announced they would not be replying to any social media comments for the duration of the shutdown. MoonPie, who had repositioned itself as one of “Brand Twitter’s” best accounts in recent years, quote tweeted @NASAMoon, reassuring space lovers that the classic treat would be happy to answer all moon-based questions. The tweet was well-received for being both light-hearted and clever, and it’s this exact strategy that saw MoonPie’s sales rise nearly 20% in 2017, directly correlated to their social media presence.

So, while it can be intimidating to think about what can go wrong if you outline clear boundaries and detailed guidelines for you and the rest of your team, you can easily avoid seeing your brand go viral for all the wrong reasons.