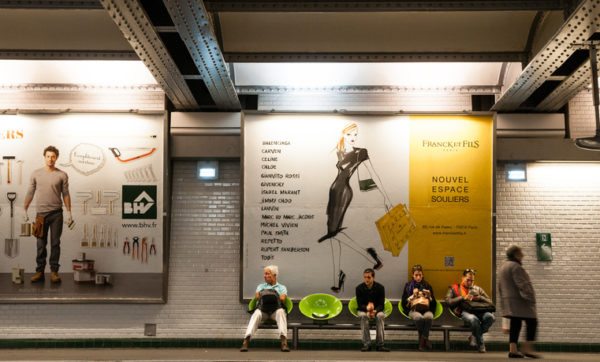 Though our “Beer Friday” conversations may suggest otherwise, we’re pretty traditional over here—and yet we’re always challenging ourselves to push beyond the constraints of conventional marketing.

Our most recent endeavor into more unconventional marketing territory was our campaign for long-time client Night Hawk Frozen Foods. Starting with a rebrand of their packaging and website in 2013, we’ve since taken on their social media strategy and digital campaigns.

And then, this spring, we went rogue. (Kind of.)

The foundation for Night Hawk’s new campaign was in the human-bodied, hawk-headed, wide-eyed mascot who reared his head in earlier digital ads—and still does. Sometimes, he even fills in for historical figures. We decided it was time for his face to move beyond the screen and into the world.

Inspired by the recognizable kitsch of personal injury billboards, our marketing team decided to double-down on our reliable hawk and evolve him into “Hawk & Hawk,” a pair of lawyers committed to warning unsuspecting people—particularly those stuck in Austin traffic—about the dangers of an acronym they had never heard of before. Scattered throughout the city, the billboards, which are intentionally reminiscent of sketchy lawyer ads, warn drivers that they may be “suffering from D.FM.” and urge them to visit a certain website to “taste justice.”

On the site, visitors gain insight into the symptoms of “Disappointing Frozen Meals,” read about Hawk & Hawk’s professional backgrounds, and learn about D.F.M. success stories. They also have the opportunity to enter a giveaway to win a month’s supply of Night Hawk. In the end, Hawk & Hawk wants to fight for you and win you compensation in the form of Night Hawk meals.

The “Taste Justice” campaign continues across social media channels in big way. Wherever strangers or devoted Night Hawk fans go, there are the Hawks.

While Taste Justice does seek to blur the lines between what’s clearly advertising and what’s “real life,” anyone (hopefully) can quickly recognize that it’s all satire once the initial D.F.M. mystery is revealed.

Simply put, it’s just a bit too obvious to be the often subtle, subversive, and sneaky workings of guerrilla marketing—a few examples of which have caught our attention and, as the marketers behind them hoped, gone viral.

One unconventional marketing strategy that stands out the most also might be the most unsuspecting. We think it’s pretty damn brilliant, too.

Bait and Switch (In a Good Way)

On August 1, a woman named Louise Delage popped onto the Instagram scene and garnered tens of thousands of followers in a few short months. And like any other trendy, well-traveled Instagrammer, people enjoyed being observers (maybe even voyeurs?) of her enviable lifestyle. Except the whole point was that her life wasn’t supposed to be enviable at all.

Louise isn’t a real person. She’s the invention of Paris agency BETC and production company Francine Framboise for Addict Aide. A closer look at Louise’s photos uncover the disturbing fact that she’s an alcoholic. In nearly every photo or video, she’s either holding a drink or has one nearby.

Louise’s followers, who noticed the drinks and still gave their enthusiastic approval, were also Louise’s enablers. That’s why the campaign is called “Like My Addiction.” For those who didn’t notice the drinks, the campaign provokes a conversation about what alcoholism looks like—or doesn’t.

Blending Into Our World

Louise’s drinks and her aesthetic seem so at home in our culture that we literally can’t even identify what’s wrong with any of her pictures. Though just as subtle, it’s less like old-school subliminal advertising where a woman’s body lay hidden atop a Coke bottle, and more like a reflection of ourselves and our friends. Like many people we know, her alcoholism hides in obscurity.

While more forward alcoholism ads can be just as compelling, there’s something especially powerful about how Louise infiltrates and seamlessly blends into our world. It’s an unconventional marketing tactic that relies less on an emotional image and punchy copy and more on the element of uncomfortable, confrontational surprise.

The Payoff of Patience (And Strategy)

Despite dwindling attention spans on the part of consumers, thanks to the instant gratification of our digital world, campaigns akin to “Like My Addition” require a lot more patience on the part of the marketer. The big reveal for Louise didn’t come until months after her conception.

In developing her Instagram presence, Louise’s makers were strategic about who she followed, using bots to carefully select women interested in celebrities, fashion bloggers, and journalists. BETC’s patience and strategy paid off, too. Only a few hours after the reveal, Addict Aide experienced five times more traffic to its site and inspired over 140 articles.

Louise isn’t the only one getting a lot of attention lately, though.

To promote their new car, Belgian manufacturer Renault, in partnership with advertising agency Publicis, is counting something even better than “likes” or clicks: real-world views. Using cameras and facial recognition software, Renault’s on-display car keeps track of how many passersby are pausing to check it out.

Much like Envision’s own integrated “Taste Justice” campaign, those who look at the car are also entered into a sweepstakes to win tickets to the Belgian Formula One Grand Prix. They can also enter by visiting Renault’s website and guessing the number of real-world views the car has received.

Marketing That Clowns Around

As much as we admire these bold and boundary-pushing campaigns (and, as a business looking to stand out, you should, too!) we wish we could say that that’s the last of the unconventional marketing initiatives that have captured our attention in the last few months.

In exploring six possibilities for the clown epidemic (because more than one clown sighting should be considered an epidemic), CNN writer AJ Willingham suggests that one of the possibilities may be viral marketing. And in at least one clown case, it was.

A man dressed as a clown holding a “Free Hugs” sign in Agawam, Massachusetts later revealed that his performance was intended to promote the New England’s annual Scare Fest, a haunted house which will have a room solely devoted to clowns. While the clown stunt ended up making people in Agawam angry, the fact that we even know about it—and about Scare Fest—is a testament to the campaign’s effectiveness.

Whether to initiate a new frozen food craving, start a dialogue about alcoholism, create hype around a new car, or inspire visitors to visit a haunted house, abandoning conventional marketing for riskier and more patient marketing has its place. And when played right, it can have big payoff.