Let’s go back to 2007, “Umbrella” by Rihanna was playing everywhere, Britney Spears shaved her head, and Microsoft announced their search engine Live Search. Just 2 years later, in 2009, they rebranded as Bing. This rebranding formed the Bing Ad Network which consists of Yahoo! AOL, Verizon, and Bing. It is worth noting that besides Google, other platforms see similar, if not better, results with a higher return on investment (ROI). They maintain a steady 2% of market share compared to Google’s 92%.

Trust us, by the end of this you’ll be setting up your bing ad account faster than Chandler Bing.

1. Bing is bringing in the billions

We all know that Google boasts the largest search engine market share in the world and none of their competition is close to eclipsing their performance. But did you know that despite having a smaller share than Google, 6 billion searches are being performed using the Bing Network every month by over 130 million users?

Like us, you’re probably wondering where people are actually being served Bing ads. Some places you may not have known where those ads would show up are:
Xbox
Windows
Tumblr
Aol.
Yahoo!
Verizon
Huffington Post
Tech Crunch

Bing is owned by Microsoft, which is the default search engine on Windows PCs, Xbox, and Verizon phones. Additionally, this means that when you advertise on Bing, your ads will not only display on Bing search results pages, they will also display on all of the above locations as well. Per month, Yahoo! Ads reach over 117 million people, and AOL reaches over 109 million people.

2. You can use existing Google Ads campaigns

If you’re already using Google Ads, then we have some good news for you about Bing Ads. No need to build your PPC campaigns from scratch–you can just import existing Ads campaigns into Bing Ads.

This way if you’re new to Bing you can start building your campaigns around what you have been doing with your Google Adwords. Don’t worry if this sounds daunting, they know most people use Google Ads so they’ve created tips and features to make it easy to work with them.

According to Bing, 54% of their main demographic is over the age of 40. Bing Ads reach an older demographic than Google Ads which can work to your advantage if your target audience is more mature. 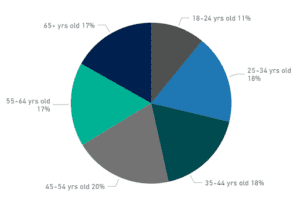 This audience is often searching on desktops more than mobile which is why their ads are most often viewed during a desktop search. This also is why the Bing image joke came to be. A few years back, people compared a search on Google with the same search on Bing. What they found was that Bing is much more image-oriented, while Google relies heavily on text. It’s no surprise that jokes about Bing being like the picture book version of Google emerged from the internet. This is also a feature that is more predominant on desktops than mobile. While some might see this as a negative thing, we see this as something to use to our display ad-vantage! With that Bing claims that ⅓ of their audience has a household income of over $100,000, which means delivering ads at a higher price point has less of a sticker shock.

When it comes to mobile device ad targeting, Google Ads can be somewhat limiting. This is not the case with Bing Ads. Bing Ads lets you target specific mobile devices based on type as well as based on their operating system.

This can be very helpful if your demographic audience favors a specific mobile device (such as an iPhone or Android). This can also be particularly useful if you are promoting an app that is only available for users with a specific device or version. There are several reasons why the ROI tends to be higher for Bing Ads than for Google Ads. First of all, the CTR (click-through rate) for Bing Ads tend to be higher on average. Secondly, the CPC of a Bing ad is more affordable than that of a Google ad. Google’s average CPC has increased every year.

TL;DR too long; didn’t read
Despite the lower costs and the large audience, most businesses limit themselves to using Google. This is mostly due to the reputation that Google has as the biggest search engine in the world. However, this means that there’s much less competition on Bing. The fewer businesses that are competing with you, the more effective your ads will be at reaching your intended audience at a lower bid. Due to the accessibility with Bing and the high ROI, it’s a smart decision to work in both the Bing and Google Ads world.

If you’re new to PPC don’t worry, we have taken the fear out of figuring out how to run ad campaigns on both Bing and Google.