It wasn’t all that long ago that the very idea of vertical video or content would send a shudder down most of the Internet’s spine. “For [expletive]’s sake, record in landscape” was an all-too-common comment under any viral cellphone video shot vertically. For decades, audiences consumed movies and TV shows filmed in a widescreen format. Even photographs are typically in a horizontal format, such as 4×6, 5×7, or 8×10.

The reason for this is simple: our eyes are aligned horizontally.

So, why is it that advertisers and content creators are scrambling to build experiences that seemingly defy the natural order?

Your first inclination may be to point out that the rise of vertical video has everything to do with the saturation of mobile devices, that because today’s smartphones are oriented vertically, it’s only natural that today’s videos are viewed top-to-bottom. You might be dusting your hands right now, proudly telling yourself “case closed” as your finger slowly yet surely drifts toward the ‘back’ button.

As we just discussed, the preference for horizontal content continued well into the age of smartphones. We used to have a ritual for video-watching. Click on the video player, click the little rectangle in the lower right-hand corner, rotate the phone, and enjoy the show! So, what changed?

In short, social media changed the game. The ritual I just described was part of a now by-gone era of the Internet when each website/brand was like it’s own petty kingdom in an infinitely vast feudal system. If you were me in the late 2000s and early 2010s, you might’ve gone directly to The Onion to watch the bizarre videos from the satirical giant before hopping to IGN to watch a video review for the latest game release and then check to see if Funny Or Die uploaded a new episode of Between Two Ferns.

The News Feed is the new king

Think of your most-frequented app, whether it’s Instagram, Facebook, YouTube, or Twitter. Each of them feature vertical scrolling as the basis for their feeds. The multitude of petty kingdoms of yore have had to migrate to one or all of these social giants to eke out a new living and while more and more of the globe gets access to mobile devices, the real estate for their attention has never been smaller.

Taking advantage of this new, vertically scrolling ecosystem is a lot like scaring off a bear in the woods. You need to make yourself as big as possible. Horizontal video takes up less space on a feed than vertical. As such, it’s much more likely to be missed or swiped by than its taller counterpart. It physically takes longer to scroll past a vertical piece of content, and those few extra moments could easily be the difference between making an impact and being scrolled past.

Take advantage of all that new space

A different orientation for your content requires a different orientation for creating that content. Just as a photographer would shoot vertically to feature different surroundings and completely change the core of the image, so should you consider how to differentiate your vertical content. Our eyes naturally look from the top to the bottom, so infographics or messaging should take advantage of that. Those in e-commerce might use vertical video or photos to better fit the human body in frame and put a better spotlight on your product. What are some interesting ways you can utilize someone’s full-screen space? 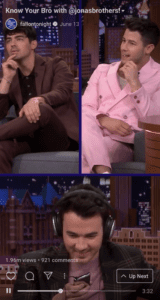 Better yet, how can you repurpose back catalogs of horizontal footage or photos to take advantage of vertical? Collages, split-screens, and frames are all increasingly viable tactics.

Snapchat, Instagram Stories, TikTok, and more are training today’s (and tomorrow’s) content creators to shoot in vertical. YouTube has also been rolling out the ability for advertisers to run vertically-oriented ads on videos that are primarily landscape, with the resolution and orientation automatically shifting to take advantage of the phone in portrait mode. These platforms and their billions of audience members aren’t going anywhere any time soon and are only going to be competing with newer platforms that provide better vertical experiences (TikTok, for example, grew in part to its complete acceptance of vertical video).

When your content is vertical, you literally stand center-stage on your audience’s mobile device. Create with that in mind and don’t waste such a valuable opportunity.